San Juan de Socueva is an ancient hermitage and chapel set into the Rocky Mountains just south of the municipality of Arredondo, Cantabria, in the north of Spain. It was built next to a series of higher caves which were inhabited by humans since ancient times. Having only recently been dated back to 660-680 A.D., the chapel is thought to be the oldest religious construction in Cantabria. The chapel still maintains its religious function and is deeply rooted in the community, which until recently still celebrated the cult of St. John the Baptist.

The chapel’s square nave has a sloping north wall of natural stone and a south wall of masonry and plaster. It is separated from the apse with its back-lit altar by a screen topped with a horseshoe opening, and is divided from the smaller vestibule by a square door frame. There is a 19th-century Neoclassical altar along the outside portico wall with a niche for an image of their patron saint.

The state of conservation of San Juan de Socueva is very worrying. The portico is in an advanced state of disrepair: its simple roof is no longer securely fixed to the rock face, and is at imminent risk of collapse. The monument itself is not physically protected and the deterioration of the chapel continues. It is vulnerable to visitors who can enter freely and take elements or cause other damage. A protective enclosure is needed until the process of analysis, research, diagnosis and conservation is completed. Although previous works were halted, the Cantabrian Department of Culture, upon the initiative of the General Directorate of Heritage, will soon launch a call for tenders for the proper restoration and preservation of San Juan de Socueva. 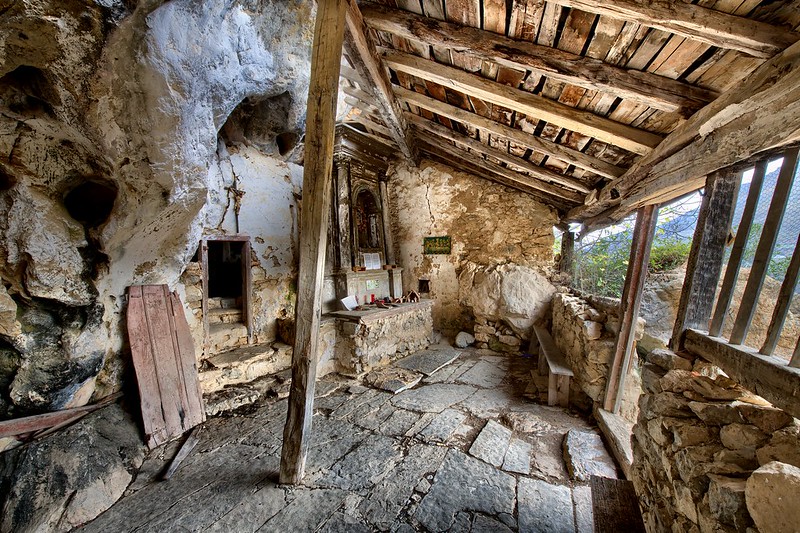 The nomination of San Juan de Socueva Chapel and Hermitage to the 7 Most Endangered Programme 2021 was made by Future for Religious Heritage, the European network for historic places of worship, which is a member of the European Heritage Alliance.

The Board of Europa Nostra, on the basis of the opinion expressed by the Advisory Panel of the 7 Most Endangered Programme, stated: “There is an urgent need to shore up and secure the wooden portico of this significant site of religious heritage. It is notable that San Juan de Socueva Chapel and Hermitage is already on Hispania Nostra’s Red List. The support and expertise of additional conservation associations and organisations is needed to progress this restoration”.