The Central Post Office is a remarkable building located in Skopje and represents the modernist Brutalist architectural style of the post-war era. It was designed by the North Macedonian architect and artist Janko Konstantinov and finalised in 1974. The building’s exceptionally powerful structure is made of reinforced concrete, in the shape of a lotus flower. Its lotus shape was intended to symbolize the reconstruction of the city of Skopje after the heavy earthquake which caused damage to the city and its infrastructure in 1963.

This extraordinary example of highly expressive and sculptural 20th-century architecture is of vital importance to the visual and symbolic architectural landscape and brutalist ensemble in the heart of Skopje, as well as for the heritage of Europe and beyond. The building, which served as the administrative Counter Hall for the Telecommunications and Postal Centre of the Federative Republic of Macedonia, is also significant as a symbol of post-earthquake resilience.

The building survived a massive fire in 2013. However, the original glazing of the dome and the murals by the interior designer Borko Lazeski, as well as the custom-made furnishings and lighting, were either completely lost or suffered serious damage.

The Central Post Office building, including its principal interior and wall paintings, is today even more endangered by disuse and deterioration, along with the presence of undermining erosion caused by rising groundwater due to the close proximity of the Vardar river. As the building still has no roof, it suffers from direct exposure to atmospheric influences with rain and snow penetrating its interior.

The nomination of the Central Post Office to the 7 Most Endangered programme 2021 was submitted by the Institute for Research in Environment, Civil Engineering and Energy (IECE). It is supported by the state-owned joint-stock company for postal traffic “POST of North Macedonia”-Skopje, the Ministry of Culture of North Macedonia, Fraunhofer IBP and the heritage and sustainability consultant Dr. Georgi Georgiev, both based in Germany. 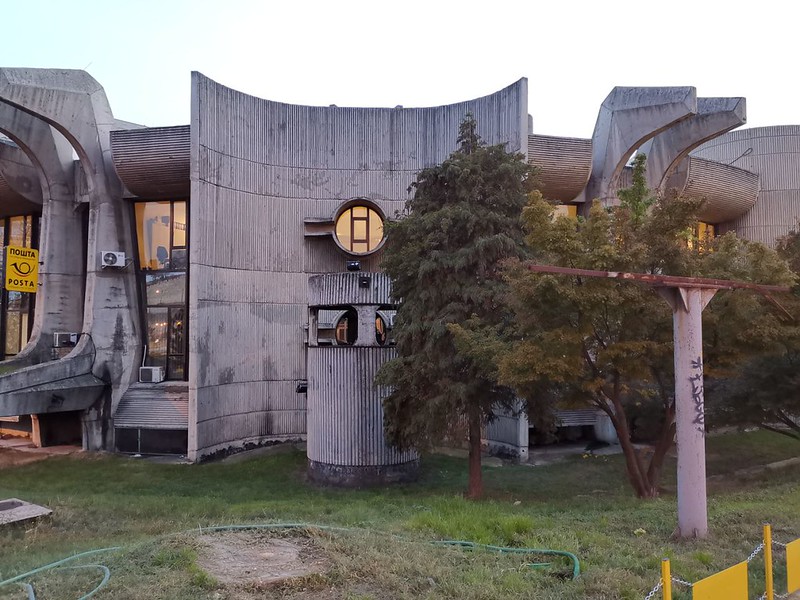 The future of the Central Post Office is uncertain due to the degree of its damage and that buildings of this shape and construction are highly complex to renovate. Raising public awareness about the importance of protection and reuse of the building is one of the main goals of the IECE and its partners.

Both the IECE and its partners are committed to functionally redesigning the building as a Center for cultural and social activities with a focus on both local and international audiences. This adaptive reuse will help deepen the understanding, knowledge and raise awareness of the potential of cultural heritage as a key source for sustainable community development.

It is planned to establish and operate a structure of public interest – with institutional, technical and staff support from the Government and other relevant institutions of the Republic of North Macedonia, as well as the scientific and professional communities – which will develop and manage the strategy and activities for conserving, re-operating and managing the potential public and private funding, financing and crowdfunding for the rehabilitation and sustainable operation of the Central Post Office.

The Board of Europa Nostra, on the basis of the opinion expressed by the Advisory Panel of the 7 Most Endangered Programme, stated: “The Central Post Office represents everything the 7 Most Endangered Programme is about: a heritage site of extraordinary significance that is a bold symbol of the rebirth of a city post-earthquake. This site needs to be reborn a second time.”