This Modernist building from the 1960s, with an iconic shape and sandblasted murals by Picasso, withstood a terrorist attack in 2011, but is now set to be demolished.

The Y-block was designed by the architect Erling Viksjø, forming part of a unified complex with the adjacent highrise from 1958. Towards the end of its construction, Pablo Picasso designed two murals for the decoration of the Y-block in the innovative sandblasted concrete technique, a new method developed by the building’s architect and the artist Carl Nesjar. “The Fisherman”, found on the facade and “The Seagull”, located in the interior, are fully integrated with the architecture, and constitute rare examples of public art produced by Picasso. 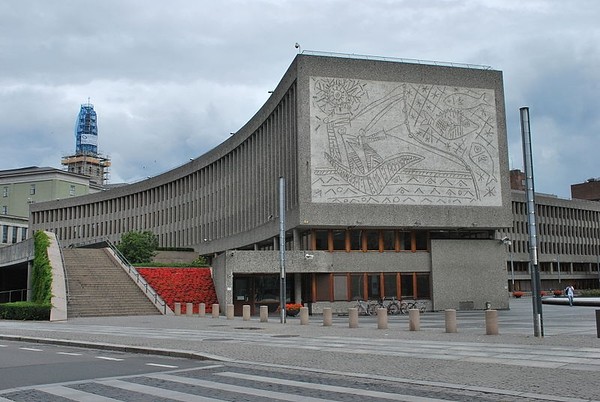 In 2011, a Norwegian terrorist detonated a bomb in The Government Quarter, killing 8 and injuring 200, before travelling to the summer camp of the Norwegian Labour Party where he murdered 69 people and injured a further 66 victims, mostly teenagers.

Viksjø’s government buildings withstood the bomb, and the site now stands as a memorial to all victims of the attacks. They are a symbol of the resilience of the democratic values that the terrorist failed to destroy.

Fortidsminneforeningen – The National Trust of Norway renewed their nomination of the Y-Block to the 7 Most Endangered following its shortlisting in 2016, to halt the plans to demolish the building. The campaign to protect the building is very active in the city and, in February, several prominent Norwegian artists performed in a concert right in front of the Y-Block. Europa Nostra also released a statement on the Y-Block, giving visibility to the activities and peaceful manifestations that have been organised so far in Oslo to save this landmark of Norwegian history from destruction.