The Castle of Sammezzano is a rare example of eclectic and Moorish architecture in Europe and is unique in this part of Italy. Over the second half of the 19th century, the Marchese Ferdinando Panciatichi Ximenes d’Aragona transformed this formerly medieval castle into a fine example of the Orientalist fashion which was popular in Europe at the time. Ferdinando was influenced by several Eastern trends, focusing on two particular styles: Arabic-Moorish, with its white “intertwined ropes” of stucco, and Indo-Persian, characterized by strong polychromatic colours. 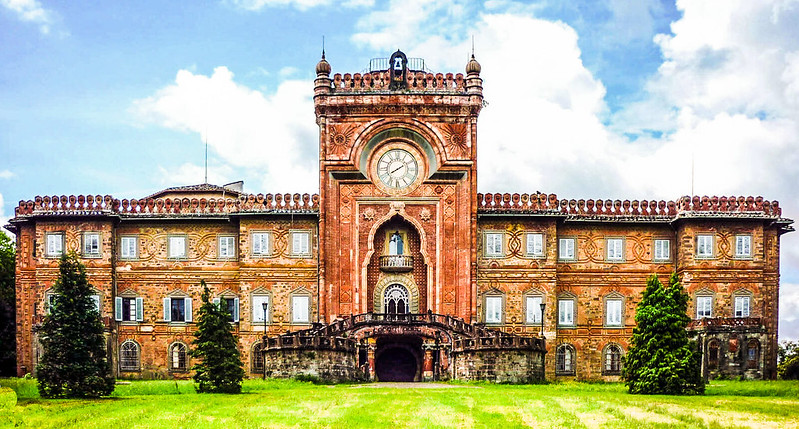 The Castle of Sammezzano is a sprawling mansion of 65 rooms. The 15 vibrantly decorated reception rooms on the first floor are the ones which have made Sammezzano famous. The entire building is one of the most striking and important examples of Orientalism in Italy.

In addition, the castle is set in a park of 470 acres (190 hectares), which boasts many extraordinary exotic tree species and has the highest number of Giant Sequoias in Italy (57).
Following the Second World War, the castle became a luxury hotel. However, for over 25 years the site has been unoccupied and neglected with its ownership remaining insecure. As a result, broken windows have gone unmended and leaking roofs unrepaired, which in turn led to severe water damage and major deterioration of the fabric of the building, including relatively fragile components such as the plasterwork, ceramics, glasswork, ornamental painting and tiling. The lack of security has laid the site bare to thefts and vandalism, with little action being taken to avoid future violations.

In addition, there are 13 other buildings on the site, all in an advanced state of disrepair, many with their roofs fallen in. Some are, or rather were, elaborately decorated in keeping with the castle’s eclectic theme and are scattered throughout the park.

The local community’s love for the site and the strong support from local and national organisations are undoubtedly a solid foundation on which the future of the castle can be built but more needs to be done to square the ambitions of the next owner with the castle’s needs. The Touring Club Italiano, together with the Save Sammezzano movement, nominated the site for the 7 Most Endangered programme 2018.