The Colour Row Settlement, built in 1924, is the only remaining example of the decade (1915-1925) that the renowned German architect Hans Scharoun spent in former East Prussia, now the Kaliningrad Region of Russia. It is an early example of modern domestic architecture with many of the original details still preserved (joinery, decoration, ceramics). It is an immediate forerunner of other now world-famous pioneering social housing projects in Germany, such as the Stuttgart Weissenhofsiedlung and Berlin Siemensstadt in both of which Scharoun was involved. 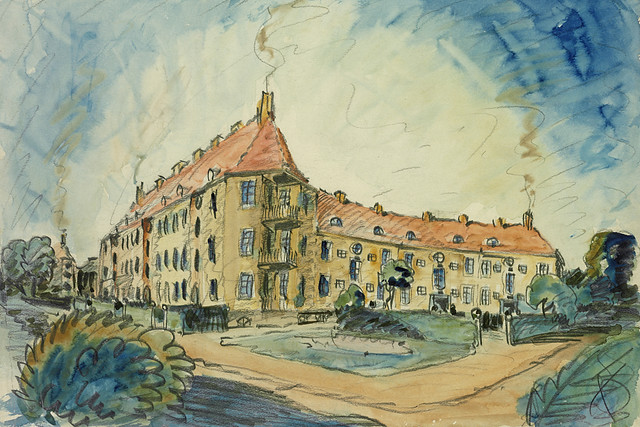 Later renowned for his design for the Berlin Philharmonic, Hans Scharoun began his architectural apprenticeship in East Prussia. He played an important role in the reconstruction of this province, which was devasted during World War I. For many years, this formative period of his professional life was unexplored, while the continued existence of this single remaining example of his early work, the Colour Row Settlement, was unrecognised. Despite the absence of virtually any maintenance over the past 60 years, the houses are still used and cherished as homes. This is one of the stumbling blocks if they are to be restored, since alternative accommodation will be needed for their residents.

Thanks to research and dedication by a small group of enthusiasts, the authorities have taken steps to safeguard this historic and significant site by listing the Colour Row. However despite conferences and symposia to underline the project’s importance in modern architecture and as a symbol of the transient nature of national borders, it hasn’t been possible so far to gather sufficient funds from Germany and/or from Russia to ensure its continued existence, let alone its restoration to proper living standards. The Colour Row Settlement complete restoration would be feasible, as well as culturally and economically worthwhile.

The International Centre of the Roerichs nominated the housing complex for ‘The 7 Most Endangered’ 2014.