The romantic, historically valuable and perfectly functional gas street lamps have been part of Berlin’s cityscape for almost 200 years. No other city in the world has preserved gas lighting to such a scale which confers to the city its unique character. 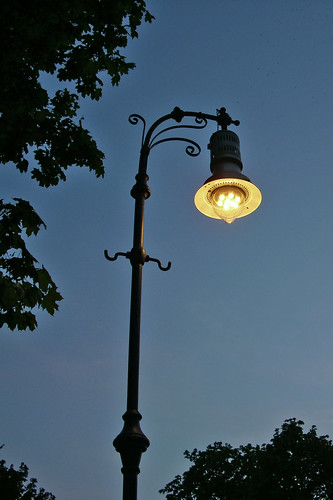 Walking in the streets of Berlin at nighttime, illuminated by the soft yellow light diffused by thousands of gas lamps, give both residents and tourists the sensation of going back in time. In 1826 there were only 26 lamps. In 1939 there were 88.000. Today 42.500 gas lamps remain. In conjunction with gasholders, water towers, factory and administrative buildings of gasworks, they are outstanding witnesses of the industrial era. In several neighbourhoods of Berlin both the gas lighting and the buildings were constructed in the same period, constituting an identity ensemble of the urban landscape. The four original types of lamps (traditional, suspended, top-piece and in-line) followed in fact the trends of industrial design from the late 19th century until the post-World War II.

Berlin’s gas street-lighting has been adapted over the decades and is currently in a good and well-functioning state. The proposed replacement of gas lamps with electrical lamps, which has already resulted in the conversion of 1.500 lamps since 2012, is opposed by the local community and numerous tourists.

The Association for the Promotion of Old Churches (Förderkreis Alte Kirchen) has been actively involved in the NGO campaign in support of gas lights and made the nomination for ‘The 7 Most Endangered’. The organisation highlights the acute threat to these pieces of industrial heritage and calls for national and international support in order to stop or delay the conversion process. The nominator advocates, among others, that the use of gas lighting as a tourist brand would attract more visitors and therefore additional income to the city.