Kortrijk, located on the western border of Belgium close to Lille, is a railway station with the value of an urban public space.

The first railway station was built in 1839, following the European trend of Neoclassicism. As a centre of exchange, the building gradually housed other public services, such as a telegraph office in 1851 and a post office between 1850 and 1905.

The station was erected at the periphery of the city of Kortrijk. However, the “new” connection affected the urban development and led to the creation of a new region in the city, with the Kortrijk Station at its core. Kortrijk became an important railway junction on the road to France. As a result, it was heavily bombed in 1944, after the invasion of Normandy. More than 1,800 buildings, including the station, were destroyed. 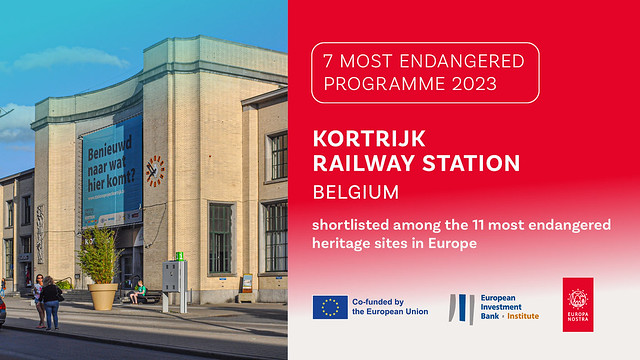 The Kortrijk Railway Station was rebuilt in 1951 to a new design by the architect Pierre Albert Pauwels, one of the most important figures in Belgian contemporary architecture. The rebuilding of the station followed the Expo 58 style, a “discussion” between neoclassical and contemporary elements.

The new building featured a bas-relief of an allegorical representation of travel and transport on its façade, which was made by the sculptor Maurits Witdouck; and an artwork depicting the river Lys and Kortrijk’s industries in the central travellers’ hall, which was made by the Bruges ceramicist Rogier Vandeweghe.

The iconic building is now threatened to be demolished for the development of a new station. The initial plan was unveiled in 2015 by SNCB and Infrabel, who are the owners of the station. The demolition would not only mean the loss of an architectural gem and symbol of post-War World II re-development, but also the loss of a public space for the citizens of Kortrijk.

The local community has been campaigning against the demolition through petitions. The nomination to the 7 Most Endangered Programme 2023 was made by the Flemish Association for Industrial Archaeology, with the endorsement of Europa Nostra Belgium, which advocates for the sustainable conservation and development of this architectural landmark. The nominator suggests retaining the public use of the building and including the citizens even further, with the establishment of offices and co-working spaces. The sustainable conservation and development of Kortrijk Station could set an example for reused industrial heritage in Europe and beyond.

The Advisory Panel of the 7 Most Endangered Programme stated: “The Kortrijk Railway Station is a unique architectural piece and a well-preserved example of Belgian railway heritage. The recent reconstructions of other Belgian railway stations demonstrate that saving the existing architecture combined with modern additions and functions, go perfectly well together.”