The Mansion (“Konaki”) of Gidas, located in the small town of Alexandreia close to Thessaloniki, is a fine example of late Ottoman architecture in Northern Greece. It was once the country residence of the local landowner, the administrative centre and the social centre of the estate. The name of the site derives from the Turkish term “Konak”, which means mansion, and Gidas, which is a village now embedded in the town of Alexandreia. 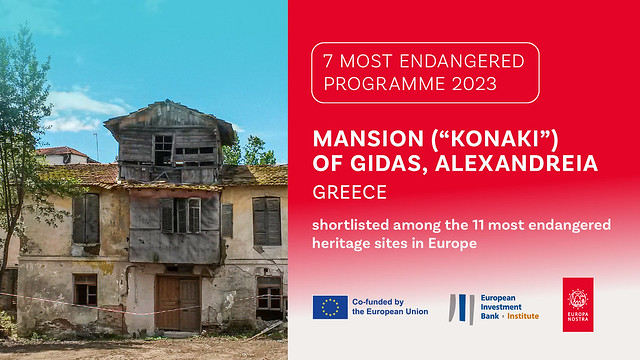 The Mansion of Gidas was probably built in the early 20th century. Its style belongs to the era of Ottoman Μodernisation and showcases the skills of wandering Balkan craftsmen. These characteristics are embodied in the prolonged closed balcony and in the symmetrical simplified arrangement of both the facade and the floor plan, which were typical of the late Ottoman period. The building techniques are also important for the history of South-Eastern European craftsmanship, as the mansion used an interesting combination of materials and techniques such as mud bricks, normal bricks, wood and timber framing that was coated with wooden pre-cut planks or plaster coating.

The “Konaki” of Gidas is an example of the legacy of the Ottoman Empire in southeastern Europe, uniting the past of several Ottoman and European rural settlements and societies. Therefore, the rehabilitation of the Mansion of Gidas could have the potential of becoming a centre for rural development and a paradigm for the “activation” of other rural monuments.

In 1912, Alexandreia was integrated into the “Kingdom of Greece”. The “Konaki” of Gidas soon became the residence and medical practice office of the area. However, since the 1970s, the building was mostly left unoccupied and thus it gradually turned into a ruin. 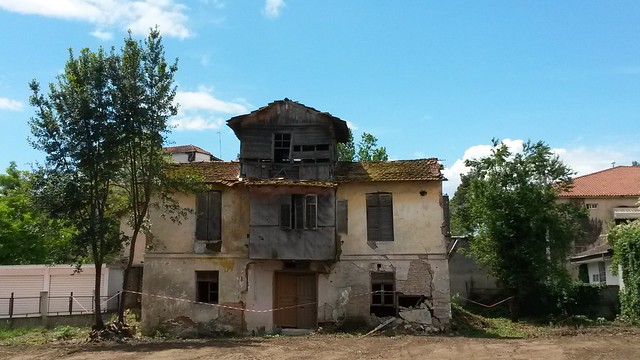 During its 40 years of dereliction, there was no protection or any act of conservation of the Mansion of Gidas. At some point an important part of it collapsed. Since then, it has progressively decayed. The remaining part of the roof protects the inner wooden structure of the building, which in turn has prevented the total collapse of the building. However, the roof is in need of stabilization, if further weather damage to the entire structure is to be prevented. Subsidence, or sinking, of the soil could cause further foundational issues for the structure and there are several critical cracks throughout the building.

With the aim of safeguarding the “Konaki” of Gidas, the local community has joined forces with the Municipality of Alexandreia, the Architecture Department of Aristotle University of Thessaloniki, local experts in fields related to cultural heritage and rural development, and Elliniki Etairia – Society for the Environment and Cultural Heritage (ELLET), Europa Nostra’s country representation in Greece. The nomination to the 7 Most Endangered Programme 2023 was made by a Young Member of Europa Nostra, Mr Yorgos Mertzanides.

The Advisory Panel of the 7 Most Endangered Programme stated: “Built by the Ottoman commander of the region and linked to historical events of the Balkan wars, the Mansion of Gidas today shows significant damage and deterioration, yet it preserves all its original features and its restoration is still feasible. The typology of the building is important considering that a large number of similar buildings have been destroyed and its location within the urban fabric of the provincial city can make it an important landmark and part of everyday cultural life. Local stakeholders and the community, cultural associations and the owners use, as much as possible, the surrounding area of the building, trying to keep it as a part of the local community’s life. The rehabilitation of the “Konaki” of Gidas, apart from saving an important monument, would also give the city a historical site documenting the Ottoman element, which is interwoven with the local cultural identity.”