Palace of Justice in Brussels, BELGIUM

Sitting on a high plateau overlooking the historic centre of Brussels, the Palace of Justice, home of Brussels’ courts of Justice, was the largest building erected in Europe in the 19th century. Designed by the Belgian architect Joseph Poelaert, this monumental piece of eclectic architecture revives the grandeur of Greco-Roman civic architecture while incorporating the wealth and industrial progress of an independent Belgium (1830) which would become the third greatest economic power in the world from 1865 to 1914.

Built between 1866 and 1883, the Palace covers an area of 26,000m² and is topped by a massive dome (116 metres tall). It contains 27 court halls and 245 offices. Eight courtyards bring natural light and air into all areas of the structure. 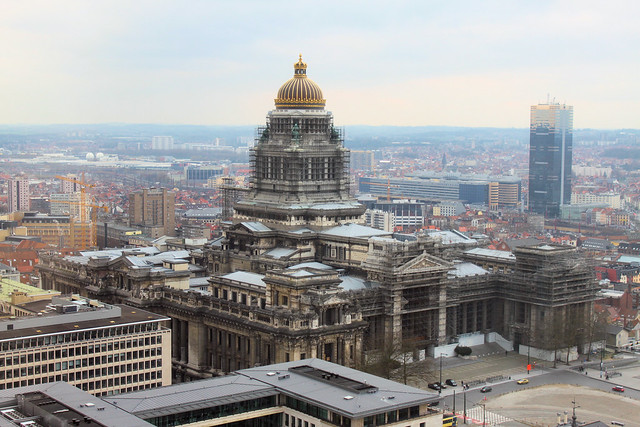 The design was greatly influenced by Classical Antiquity, featuring columns from all of the five classical orders as well as classically-inspired entablatures, doors and window frames. The building is enhanced by natural stone (principally Belgian and French) in different colours and gilt bronze detailing, including sculptures by some of the best contemporary artists. In the central portico, visitors are greeted by the statues of great orators and lawmakers, such as Demosthenes and Cicero. Located under the dome, the Hall of Lost Footsteps is a space of unequalled monumentality.

The Palace was erected using the most advanced industrial iron technologies, including iron floor and roof beams, as well as the fixing of stone masonry onto iron structures, epitomised by the portico. This was achieved through close collaboration between Joseph Poelaert and the Belgian engineer François Wellens.

The Palace of Justice was listed by the Brussels Regional Government on 3 May 2001 and has been on the UNESCO World Heritage tentative list since 2008. In October 2015, the building was also included in the 2016 World Monuments Watch, which is run by the World Monuments Fund, a US-based independent organisation devoted to safeguarding the world’s treasured places.

Despite its outstanding architectural, historic and civic value, the building has been underappreciated, particularly in recent decades. Its innovative iron frame has not been well protected from the infiltration of water and as a result the iron has rusted, increasing in volume and breaking the stone masonry. The scaffolding installed on the front facade and the portico some 30 years ago has now become corroded and unusable. Many areas in the building are empty while offices are rented in adjoining buildings to perform judicial functions.

The Palace of Justice is under the ownership of the Federal State of Belgium, through the Ministry of the Interior, and is managed by the Federal Buildings Agency. Given the rapid deterioration of the building, the Minister of the Interior started discussions in 2010 to remove, partially or completely, judicial functions from the building, which sparked protests from organisations and individuals.

The nomination for ‘The 7 Most Endangered’ programme 2016 was made by the Belgian heritage organisation Patrimoine Culturel Immobilier (Onroerend Cultureel Erfgoed). Among the partners of the campaign to rehabilitate the building and keep the judicial functions in the Palace is the Poelaert Foundation, established in 2011 by the Dutch and French-speaking Bar Associations of Brussels and the conservation architect Jos VandenbreedeI, Director of the Architecture Archive (Sint Lukasarchief), to define the principles of a masterplan for the “Poelaert Campus”, which would include the buildings adjacent to the Palace. This policy plan has been considered by ministers and parliamentarians, but has not been elaborated upon in order to result in an overall masterplan.