The Partisan Memorial Cemetery was built in 1965 in the town of Mostar. It is one of the largest anti-fascist monuments and sites in the Balkans, with its 300-metre-long paved ceremonial pathway rising more than 20 metres up a hill. The cemetery, which features some 700 individual tombstones as grave markers of freedom fighters from the Yugoslav Partisan movement, is part of a series of monuments and sites built in the region in memory of the partisans who died during World War II. 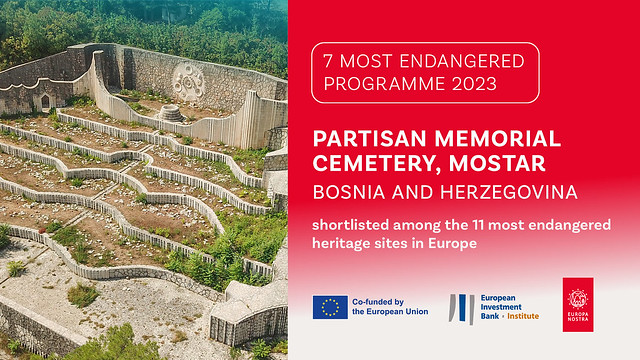 The Partisan Memorial Cemetery was designed by the famous Yugoslav architect Professor Bogdan Bogdanović from Belgrade. Skilled stonemasons built the monument over several years, using over 12,000 carved limestone pieces, rubble from the town’s destruction during the war, and traditional stone roof tiles recycled from Mostar houses. The monument was inaugurated in 1965 by the President of Yugoslavia, Josip Broz Tito, on the occasion of the 20th anniversary of the liberation of Mostar from the Nazis and their local allies in 1945.

After the war, the first conservation and restoration works on the Partisan Memorial Cemetery were done in 2005 with the support of donor funds from the Government of The Netherlands and the Kingdom of Norway, and with co-financing from the City of Mostar and Federation of Bosnia and Herzegovina.

However, the Partisan Memorial Cemetery has been, and still is, one of the region’s contested heritage sites. This has resulted in repeated acts of vandalism up until the most recent destruction which happened in June of 2022. This was followed by numerous reactions from the Mayor, the City Council, the Commission to preserve national monuments of Bosnia and Herzegovina, as well as from anti-fascist activists and associations both at local and international level, and also the reaction from numerous organisations from the territory of former Yugoslavia, which condemned the vandalism of the Partisan Memorial Cemetery. Recently, the Agency “Old City” of the City of Mostar launched the public procurement for the revitalisation, rehabilitation and illumination of the Partisan Memorial Cemetery. However, the monument does not yet have a holistic plan for its conservation and maintenance with a corresponding funding. The whole process of its necessary restoration and revitalisation therefore remains precarious.

The local community in Mostar has developed various campaigns for the legal protection of the Partisan Memorial Cemetery as a Monument of National Importance. Among other initiatives, they produced a documentary about the history of this memorial site and the threats and challenges it faces today.

The nomination of the cemetery to the 7 Most Endangered Programme 2023 was made by IDEAA Mostar with the endorsement of the Mayor of Mostar, the Galerija DESSA and Europa Nostra Serbia. The nominator advocates for adequate legal protection of the Partisan Memorial Cemetery following its designation as a Monument of National Importance back in January 2006, for the European and international recognition of its outstanding historical and artistic values, as well as for the development of a sustainable rehabilitation, maintenance and management plan for this exceptional memorial site and the allocation of necessary funds – from local, national and European sources – for the quality implementation of such a comprehensive plan.

The Advisory Panel of the 7 Most Endangered Programme commented: “The original design of the Partisan Memorial Cemetery in Mostar deliberately avoids the use of political or religious symbolism but makes use of cosmological symbols reminiscent of pre-Columbian remains and perhaps also referencing similar elements present in medieval sites in Bosnia and Herzegovina. As such, it is an outstanding example of the high-quality commemorative culture rooted in anti-fascist ideals within SFR Yugoslavia. At the time when Europe seeks to assert and put a much stronger emphasis on the vital importance of the shared values which form the very basis of the entire European project, this significant place of memory located in the Western Balkans should be restored with the support of local, national and European funds and protected for present and future generations.”