Situated in the western area of the Carpathian Mountains, the landscape of Roşia Montană has been gradually transformed by gold and silver mining, from prehistoric surface works to deep underground galleries, continued in medieval and modern times, up to the 1970’s. Hence the subterranean heritage, consisting of a vast gallery network (some 150 km, out of which 7 km from Dacian and Roman times) and in situ equipments and artefacts, as well as surface habitation vestiges – Roman funerary sites, edifices and roads, medieval and modern areas – together with small towns and villages, nestled down in the mountain valleys. 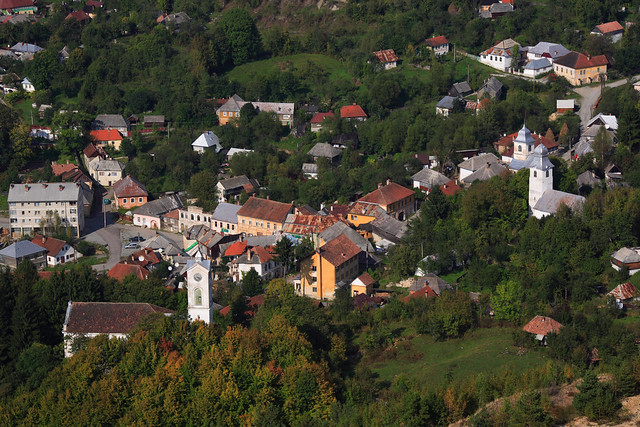 Along centuries, the settlers coming from various parts of Europe created communities of an interesting cultural diversity, to mention only the 5 denominations (catholic, orthodox, greek catholic, unitarian, calvinist), whose churches and houses are still witnesses of their way of life. All the surface features – paths, roads, reservoirs, water channels, stamping areas and Roşia Montană in itself – demonstrate a positive interaction between man and environment, which has resulted in one of the most representative mining landscapes in Europe. The site as a whole and 50 of its components are listed as historic monuments and two geological formations as natural monuments.

A major threat to the site and the vast surrounding area is the large-scale open-cast mining project promoted by a Canadian company, which is the main shareholder of the Roşia Montană Gold Corporation (RMGC).

The nomination for ‘The 7 Most Endangered’ programme was made the Pro Patrimonio Foundation. Together with other national and international organisations and various local NGO’s they have campaigned over the years against the RMGC project. They advocate an alternative, sustainable, long-term development project based on the assets now in danger – the mining landscape, the cultural and natural heritage – which would lead to the re-emergence of social and economic models based on traditional building and farming.