The Tchakvinji Fortress, located in the northeast of the city of Zugdidi, was constructed between the 2nd and 5th centuries and remained in use until the 18th century. Since the Hellenistic period (323 BC – 33 BC), the fortress has been related to the silk roads. This significant monument was a vivid part of the history of Georgia in the region, since it also served as a shelter for the locals during the pre-revolution period of Tsarist Russia. In this period, the fortifications were bombarded with cannons, causing significant destruction. 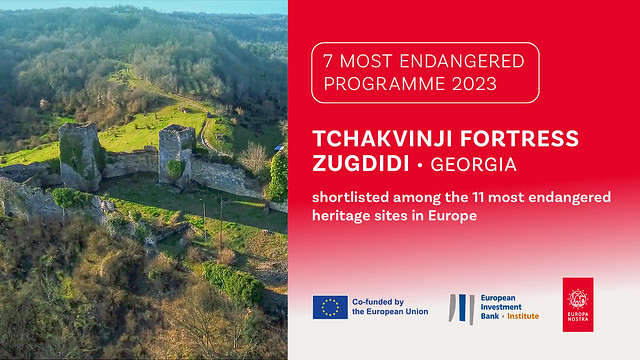 Abandoned for over two centuries, the monument has suffered from deterioration and has been exposed to severe weather conditions. During the Soviet period, lime mining and the creation of underground vacuums caused the degradation of the slope, affecting the natural landscape as well as endangering the foundations of the monument.

The academic community of Georgia has been well engaged in activities around the fortress since excavations took place there in 1968-69. The excavations showed that there was continued habitation at the site since the Late Bronze Age, reinforcing the heritage significance of the landscape.

In 2017, the Georgian Government put the Tchakvinji Fortress in the Category of Monuments of National Significance.

The Zugdidi Cultural Development Strategy (CDS), which was elaborated with the support of the EU4Culture project, aims to position Zugdidi as a city of cultural heritage innovation. This includes supporting the city’s cultural heritage and re-conceptualising the role and functions of historic sites, while discovering hidden histories and initiating new types of cultural activities, among other strategic aspirations. Therefore, the existence of the CDS, together with the adopted action plan, creates favourable conditions for further fundraising and awareness raising, which ultimately, will support the long-term preservation of the site.

As a result, the physical protection of the site will be achieved. The project will also contribute to community empowerment and to creating a sustainable socio-economic environment for the local population which would allow them return to their ancestral homes. The preservation of the fortress is expected to enlarge the job market of this rural community and at the same time attract more cultural visitors in the region.

The nomination to the 7 Most Endangered Programme was made by the Georgian Arts and Culture Centre (GACC), Europa Nostra’s country representation in Georgia. It has the support of the City Hall of Zugdidi Municipality, owner of the site, and other local partners.

The Advisory Panel of the 7 Most Endangered Programme agrees with the nominator that “the proximity to the historic city of Zugdidi and to the Black Sea Coast should be foregrounded as a source of international and local tourism”.