The two towers of the Mafra National Palace feature a unique set of 120 cast bronze bells, divided into carillon, liturgical and hour bells. These outstanding musical instruments, both of which cover a range of four octaves, are the largest surviving 18th century carillons in the world. The northern-tower carillon has never been altered; therefore it provides a rare example of the sound of bell-performance in its original tuning condition. This unique collection also includes the largest known set of automatic melody barrels and clock systems. These masterpieces of automatic music and horology represent a major legacy of European 18th century scientific and artistic thought. 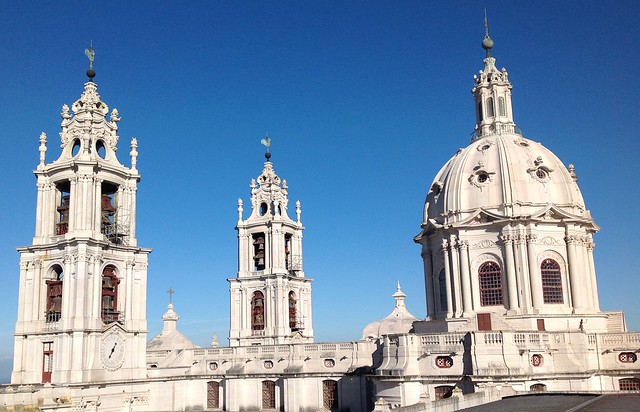 Due to lack of maintenance, in the case of the northern-tower, or poor conservation, in the case of the southern-tower, the wooden structures that support the bells are at risk of collapse, threatening the integrity of the towers and of the monument itself. Emergency work to stabilise the structures has been undertaken but transnational expertise and financial support are needed to save these gems of our tangible and intangible heritage.

The Mafra National Palace is a key work of the Baroque in Portugal, featuring a basilica, a convent, a royal palace and a library endowed with 36,000 books. Its construction began in 1717 by order of King John V and was completed in 1735. The monument was also rediscovered in the 20th century by the Portuguese Nobel Prize in Literature winner José Saramago, who featured it in one of his best-known novels, ‘Memoirs of the Convent’.

Nowhere else in the world is there a basilica with six organs of such high artistic and historic values and two carillons of this size and significance. The six pipe organs built for simultaneous performance were masterly restored and received a European Union Prize for Cultural Heritage / Europa Nostra Awards in 2012. The restoration of the carillons would strengthen the links of the monument to music, through exchanges with universities and music schools. It would also help to attract new audiences and stimulate the integration of the Mafra Palace into the national and international tourism and musical circuits.

The nomination for ‘The 7 Most Endangered’ 2014 was made by Centro Nacional de Cultura.