The Giusti Garden (Giardino Giusti), located in the city of Verona, dates back to 1570 and was planned by Count Agostino Giusti. It is one of the finest examples of a typical Tuscan Renaissance garden that has survived in its original form until the present day and still belongs to the same family. The extraordinary cultural significance of the Giusti Garden is mainly related to its Italian garden design and its features.

The Giusti Garden has been open to the public since its inception. It soon became an obligatory stopping off point for travellers visiting Italy, including poets, artists and crowned heads of Europe. Among its distinguished visitors were Goethe, Mozart, Thomas Addison, Emperor Joseph II and Tsar Alexander I of Russia. The German writer and statesman Johann Wolfgang von Goethe visited the Giusti Garden in 1786 and was fascinated by an over 600-year-old cypress that he majestically described in his 1817 ‘Journey to Italy’.

The Giusti Garden cultivates various rare species and is home to a boxwood labyrinth in a complex design, one of the oldest of its type in Europe. It also functions as an outdoor theatre that is open to the public, with concerts and performances of pieces from the 16th century to the present day. The Renaissance garden is enriched with mythological statues and fountains; it is divided into two parts: the lower garden and the forest on the cliff. Its cypress-lined central avenue divides the garden into a labyrinth, on the left, and the parterre, on the right. On the courtyard wall the collection of Roman epigraphs and archaeological fragments collected by Agostino Giusti is displayed. There are also five grottoes, crowned by a wonderful belvedere, from which visitors can admire the skyline of Verona.

In 2020, the Giusti Garden was hit by three severe thunderstorms which caused extensive damage to the entire site. About 30 trees – one third of the total – and part of the boxwood labyrinth were uprooted along with some additional boxwood in the parterre. Three 17th-century statues and the lighting and irrigation systems were also broken or severely damaged. In addition, the storms postponed major restoration actions that were planned for the roof of the main 16th-century palace adjacent to the garden, which was also open to the public. 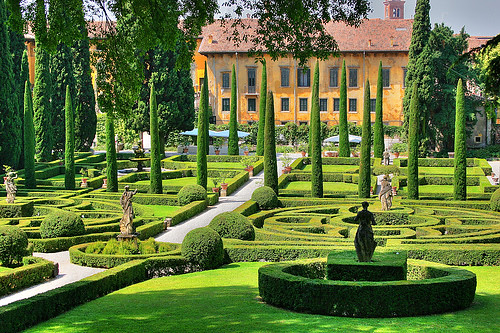 At the expense of the owner, the uprooted trees were removed and the garden secured; the collapsed walls were buffered and strengthened; the root residues of the felled plants were removed from the ground and the holes necessary for replanting were prepared. The replanting of damaged trees and boxwoods have not been planned yet.

A preliminary budget for the restoration of the Giusti Garden has been set up. However, the property lacks funds to finance itself and no plans have been prepared to access European funds or to garner international donations. With the garden closed to the public for many months due to the COVID-19 pandemic and without any income due to the lack of tourists, finding the funds to support the restoration costs of the Giardino Giusti has become even more difficult.

The Garden Giusti was nominated to the 7 Most Endangered Programme 2021 by an individual member of Europa Nostra from Italy.

The Board of Europa Nostra, on the basis of the opinion expressed by the Advisory Panel of the 7 Most Endangered Programme, stated: “A conservation plan for the Giusti Garden with a strategic pruning and botanical study must be set up and carried out with the aim of enduring any further natural or environmental threat. The restoration of the garden, the repair of the lighting and irrigation systems and the restoration of the roof of the palace should be carried out in the short term. Trees with historical importance, such as Goethe’s cypress, should be preserved and put on display”.

Moreover, the Board of Europa Nostra also highlighted that “many Gardens in Europe are threatened by climate change effects and it is important to raise awareness on the need to invest in their preservation”.