Sveti Stefan, with Miločer Park, is a cultural heritage site of unprecedented beauty; it is often considered the symbolic image of Montenegro. Sveti Stefan is a 15th-century fortified town, built as the cultural and administrative heart of the Paštrovići region. The 1.2-hectare islet, with its stone houses, four churches, streets, lanes, squares and gardens, is connected by a low bridge to the mainland in close proximity to Miločer Park. The park includes a 1930s summer residence of a Yugoslav royal family, including several buildings, two beautiful beaches, a 19th-century French bridge, and a botanical garden landscaped in the French classical style. 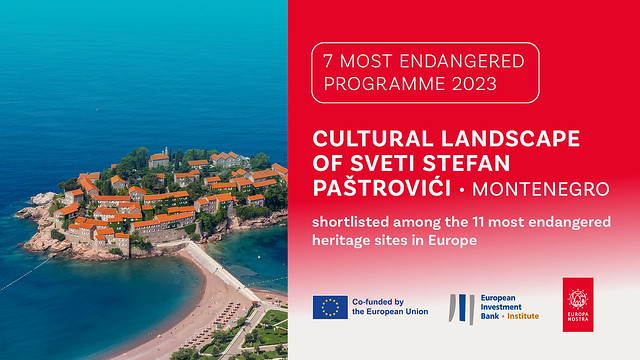 In the mid-1950s, the local inhabitants’ property was expropriated or confiscated to develop a town-hotel in Sveti Stefan. The resort was very successful during the 1970s and 1980s and attracted the rich and famous. Today, however, the continued overdevelopment of the hotel complex has become a threat.

One of the main threats to the cultural landscape of the Sveti Stefan and Miločer is the uncontrolled development of tourism and real estate facilities inside the site area. Moreover, the local community has noticed that there has been illegal construction in the area, despite the outstanding cultural and natural value of Sveti Stefan. On the islet of Sveti Stefan, the access is limited to the guests and employees of the tourist resort. This means that the locals have lost their right to participate in their own culture. Culture in Sveti Stefan included both cultural heritage, but also the cultural practices of the people, namely social gatherings for folkloric performances and festivities.

Since 2021, the local community has made great efforts to safeguard Sveti Stefan and initiated the cultural protection procedure for Miločer Park, with the listing of the site of significant importance for Montenegro being the first step. Their demand was accepted, however the registration process is long. They have already initiated talks with the National Commission for UNESCO of Montenegro and initiated discussions with the Ministry of Ecology, Spatial Planning and Urbanism and members of Montenegro’s Parliament. Their activism on the protection of their heritage has also been expressed through protests in front of the tourist resorts in Sveti Stefan.

The Advisory Panel of the 7 Most Endangered Programme noted: “Despite Sveti Stefan having National Cultural Heritage Classification and that the islet’s oldest church, St. Stephens, received UNESCO funding in 1984 for restoration, the Montenegro State has almost half privatised this national treasure and disenfranchised its own citizens from their own public domain. Unauthorised building and site changes are altering the whole aspect of the site. The popular and public summer theatre has been closed and dismantled. Public access to Sveti Stefan old town and other parts of the site has been forbidden, even during winter months when the hotel is closed, making it impossible for locals and non-hotel guest tourists to enjoy this cultural landscape. This is in direct contravention of the Faro Convention which Montenegro ratified in 2008. Furthermore, there is a plan to construct an inappropriate, large-scale condo hotel next to the entrance to Miločer Park, which would cause significant harm to the whole cultural and natural area of Sveti Stefan and Miločer Park, and damage the beauty of the coastline.”

The nomination to the 7 Most Endangered Programme 2023 was made by the group of citizens “Initiative for Sveti Stefan”. The nominator urges the government of Montenegro to limit the building development that has negatively affected the cultural and natural landscape of Sveti Stefan and fully claim the region as public. They suggest the creation of a cultural centre to host a local museum and cultural activities, such as dance performances, festivities, seminars and workshops about their heritage, in combination with certain existing hotel facilities.