Built in the first half of the 14th century, this Serbian Orthodox Church Monastery, with harmoniously combined elements of Eastern and Western artistic expressions, its encyclopedic ensemble of frescoes in Serb-Byzantine style, and its Romanesque-Gothic architecture and sculptural decoration, is among the most distinguished heritage ensembles of its time. The monastic complex is surrounded by a dense forest that forms part of an unspoiled cultural landscape which is inseparable from its priceless cultural heritage. Continuously inhabited for almost seven centuries, the Dečani Monastery is a functioning monastery with daily liturgical services and an active monastic community that takes care of the daily maintenance of the monastery and its surroundings and safeguards the intangible heritage of monastic life. Besides being an important place of worship, it is a place open to pilgrims as well as visitors of all faiths.

The Dečani Monastery was inscribed on the World Heritage List as a single site in 2004. In 2006, this status was extended to three other Serbian Orthodox Church monasteries and churches in Kosovo – Gračanica Monastery, the Patriarchate of Peć and the Church of the Virgin of Ljeviš in Prizren – under the denomination “Medieval Monuments in Kosovo”. Since 2006, all four sites have been inscribed on the UNESCO List of World Heritage in Danger.

Ever since June 1999, the Dečani Monastery has been continuously guarded by the NATO-led KFOR peacekeeping troops. Besides security concerns, the monastery with its special protective zone are facing ongoing risks of unsuitable local development – in breach of the rule of law – which would undermine the values of a UNESCO World Heritage Site. Especially worrying is the plan for an international road – connecting the municipalities of Deçan/Dečani in Kosovo and Plav in Montenegro – that would cross the special protected zone and pass next to the monastery gates. In Summer 2020, road works have been suspended and agreement was reached, under the aegis of the international community, to build a by-pass for this road. The overall situation requires to be closely monitored to ensure the full respect of the rule of law, and especially of the 2008 law on special protected zones which does not allow for such a road. In this context, it is also important that the 2016 ruling of the Constitutional Court of Kosovo – confirming that the property of 24 hectares of surrounding land belongs to the Dečani Monastery – is duly enforced by responsible authorities and this without any further delay. 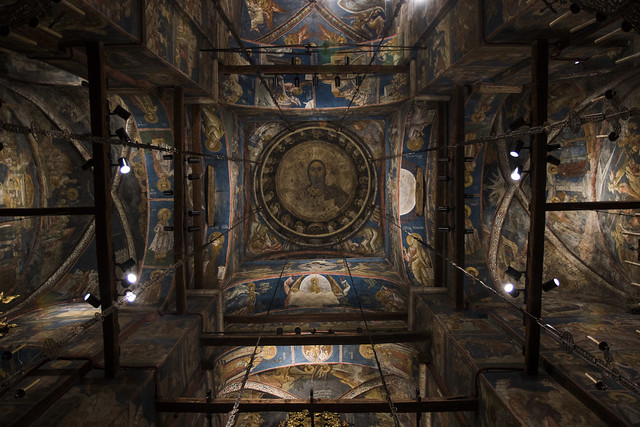 Future for Religious Heritage, the European network for historic places of worship, which is a member of the European Heritage Alliance, nominated the Dečani Monastery to the 7 Most Endangered Programme 2021.

The Board of Europa Nostra, on the basis of the opinion expressed by the Advisory Panel of the 7 Most Endangered Programme, stated: “This is the only monument in Europe under such robust international military protection for a continuous period of 20 years. Yet, it constitutes a monument of outstanding historical and cultural importance for Europe and the world, as confirmed by its World Heritage status. As part of the EU enlargement strategy for the Western Balkans, it is urgent and imperative to ensure a holistic protection by all parties concerned of this endangered World Heritage Site through full respect of the rule of law and other key European values. Adequate protection and accurate interpretation, communication and education related to the multi-cultural and multi-religious heritage in Kosovo are a prerequisite for reconciliation and dialogue leading to lasting peace and prosperity in the wider region.”