Sitting in a secluded location close to Edinburgh, above the river North Esk, Mavisbank is one of the most significant works of architecture of early 18th century Scotland. The building was designed by William Adam, the foremost architect in Scotland of his time, and Sir John Clerk of Penicuik, a leading intellectual figure of the Scottish Enlightenment and owner of the house, and was completed in 1726. Mavisbank is essentially a Palladian villa adapted to northern European conditions, with a centre block and two pavilions creating an extraordinarily picturesque composition. Despite its historical and architectural significance, the house is in an advanced state of disrepair. 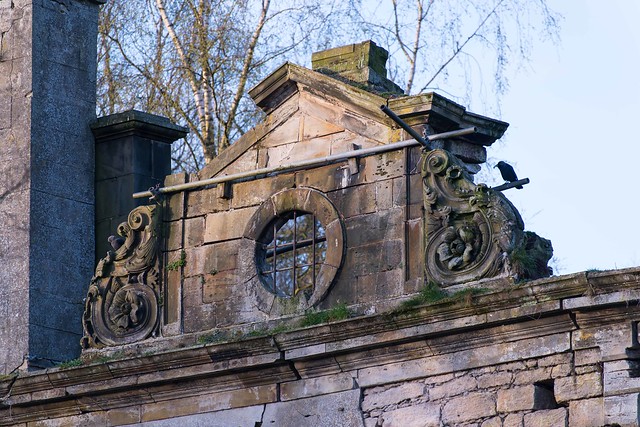 Mavisbank is in an area that has suffered from post-industrial blight, with the local coal mines having long closed down. The house was affected by coal mining subsidence in the mid-20th century, although this is repairable. By the 1960s, the grounds were being used as a scrap yard and a major fire in 1973 left the house as just a shell without a roof. The local authority sought to demolish it as a dangerous building, but following an all-night hearing in Court, a judge quashed the demolition order. Scaffolding to support the structure was inserted in 1987 and the building was fenced off for safety reasons.

Mavisbank has endured the most extraordinary tale of ownership over the last 40 years, worthy of the finest detective novel. Before his death, the last owner bequeathed the house to three individuals in the United States, who are now known to be fictitious. This lack of ownership has been a significant impediment to attempts to restore the house.

Minor works to stabilise and protect the exposed wall-heads were undertaken by the Mavisbank Trust in 2013-14. However, the condition of parts of the building is now extremely serious, and finding a sustainable reuse and restoration project is an urgent priority for the house.

The house is situated close to Scotland’s capital – approximately 30 minutes from the city centre – and is in a location that would benefit from any regeneration projects which could support local employment and engage residents with their surroundings. There have been a number of ideas mooted for a sustainable reuse for the house, including restoring it for use as a community facility, holiday home, or even private residence. It is hoped that the nomination for ‘The 7 Most Endangered’ programme 2016, submitted by the Mavisbank Trust, will raise awareness of the building’s plight to an unprecedented level, helping to draw further support for its restoration within Scotland and potentially from much further afield.