The Memento Park, also known as the ‘Statue Park’, is a history museum, educational centre, artistic action ground and tourist attraction – the resting place of statues which used to symbolise communist ideology in the streets of Budapest between 1945-1989. During the change of the political system in 1989-90, the public in Eastern European communist regimes turned radically against reminders of that era. In Hungary, a unique political and societal compromise initiated the relocation of unwanted public propaganda statues. The design competition to relocate 41 artworks was won by architect Ákos Eleőd. Opened in 1993, ‘One Sentence About Tyranny’ Statue Park is Europe’s first, and until today only, propaganda statue collection within a politically neutral setting. 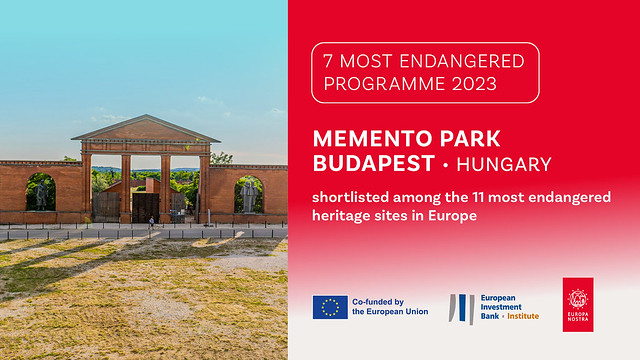 The European significance of Memento Park emphasises the importance of democratic values by presenting political statues within an objective, artistic context; an inspired way to address a challenge faced across Europe.

“These statues are a part of the history of Hungary. Dictatorships chip away at and plaster over their past in order to get rid of all memories of previous ages. Democracy is the only regime that is prepared to accept that our past with all the dead ends is still ours; we should get to know it, analyse it and think about it!… This park is about dictatorship. And at the same time, because it can be talked about, described and built up, this park is about democracy. After all, only democracy can provide an opportunity to think freely about dictatorship. Or about democracy, come to that! or about anything!” stated Ákos Eleőd.

Time and continued relevance for new generations have proven the validity of this statement, giving visitors responses to family secrets, understanding for silence, absolution from trumped-up charges and answers to unspoken questions. Memento Park’s cultural heritage significance is how it explains dissonant heritage sensitively through metaphors. Sharing its distinctive approach with European audiences will benefit dissonant heritage’s appreciation in society.

However, Memento Park’s significance and sustainability are at increasingly urgent risk. Since opening in 1993, it has not been subsidised by the State. It has been operated and maintained by a business organisation, with support of a public benefit foundation since 2007. In this hybrid operational form, funding for conservation or development relies on income generated by visitors, which has become unpredictable. The operators undertake general maintenance, but income is insufficient for expert conservation. Reinstallation of the artworks onsite was done by unskilled workers; therefore, deterioration began immediately but has recently accelerated. The skills needed for appropriate conservation are missing or expensive in Hungary.

The nomination to the 7 Most Endangered Programme 2023 was made by the Monumentum Public Benefit Foundation and endorsed by ICOMOS Hungary and the Budapest History Museum. The ambitions for Memento Park through the 7 Most Endangered Programme are to raise European awareness and informed understanding of cultural appreciation of dissonant heritage, and to provide expert support for digitalization and conservation of the artworks and the park’s future sustainability.

The Advisory Panel of the 7 Most Endangered Programme stated: “In 1989, when European countries re-emerged from under the cloak of Communism, they were faced with a conundrum: leave their recent history under that cloak, or assimilate it into their national storyline. That dilemma may be diminished but it has not been fully reconciled in the collective consciousness of the respective countries or the continent. It now has a name: dissonant heritage. Hungarians applied their characteristic shrewd inventiveness by having it both ways: the ideological public art sculptures that had overshadowed life in Budapest were ‘rehomed’ to the city outskirts, deprived of context but not of existence. Their audience for 30 years has been the determined tourists, for it is perfectly possible (and likely) as a Budapester to have lived those 30 years without ever having given them a thought.”

The Advisory Panel added: “But now, one generation on from the experience lived pre-1989, is that symbolism quietly dying? Have the monuments served their aim of reconciliation with the past? Certainly, their condition is beginning to fade with the memory. Is the curiosity of strangers sufficient? Should younger generations be reminded? Can artistic skills be objectively appraised without the associations of regime? Is the Hungarian approach to dissonant heritage a model for Europe? These are the challenges, and perhaps the opportunities, if the Memento Park becomes one of 7 Most Endangered heritage sites in Europe for 2023.”