Built in the mid-18th century, the Sisters’ House Ensemble (“Schwesternhaus”) is located in Kleinwelka, a former Moravian settlement in Saxony, Germany. The ensemble consists of five buildings: the Sisters’ House, which had large communal spaces, such as a dormitory, a dining room, a prayer hall and a room for health care, the “Pharmacy”, the “Wash House”, the Remise and “Villa Anna”. 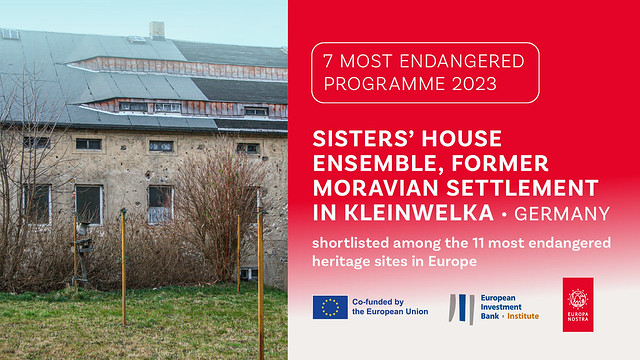 The Moravian community, founded in the early 18th century, originates from religious refugees from Moravia in today’s Czechia. The Moravians established a number of settlements in Germany, including in Kleinwelka, over the years. According to their church rules, women also lived here in so-called ‘choirs’. Until 1770 the ensemble of buildings in Kleinwelka housed mainly women of Sorbian origin, a Slavic minority in Germany.

The sisters lived together and shared their religious faith. They set up an education system and ensured substantial health care for themselves and locals. The sisters were also active in the wider community of Kleinwelka and the rural area beyond. This included the opening and running of a public pharmacy, for which they had determinedly fought for legal permission, maintaining the related herbal garden, opening a confectionery to sell homemade sweets and providing the local school with healthy food.

Moreover, the sisters educated children who lived in the colony while their parents travelled abroad as missionaries. Therefore, Kleinwelka was a cradle of ideas, values and skills that were taken into the world by the children who would subsequently depart as missionaries once they grew up.

This Moravian settlement began to decline by the 20th century. Tenants started gradually moving out due to low housing standards. Since then, the abandoned ensemble of buildings has been hardly used and has fallen into decay. It suffers from humidity, damaged ceilings, windows and floors.

The Advisory Panel of the 7 Most Endangered Programme emphasised: “The Sisters’ House Ensemble has an extraordinary heritage value, though largely unrecognised until recently, but it is also acutely endangered. This ensemble of mid-18th century historic buildings clearly has an architectural value (“modest Baroque style”); furthermore, it embodies immaterial heritage value of past female-based activities within the Moravian but also the wider community, including the local Sorbian minority, as well as cross-border linkages in this German-Czech-Polish border region. Once restored, the ensemble could present local history and serve a variety of social activities of local, regional and cross-border importance. A very committed support association strives to contribute to such development.”

The Advisory Panel added: “The Sisters’ House Ensemble in Kleinwelka is unique in its status of origin. Other places, such as Christiansfeld in Denmark, were granted UNESCO World Heritage Status. The cradle place of Moravian Church Herrnhut is currently applying for the same status. Kleinwelka is considered to be an important element to present the interesting history of the Moravian community.”

Europa Nostra Germany nominated the site to the 7 Most Endangered Programme 2023. The nominator aims at protecting, preserving and raising awareness of the heritage of the Sisters’ House Ensemble, which is in many ways directly linked to European heritage and values.

The preservation of the Sisters’ House Ensemble is supported by local and international organisations, such as the Friends of Schwesternhaus e.V., the local congregation of Moravians in Kleinwelka, the Public Service Agency Bautzen, the City Council Bautzen, the State of Saxony, the Technical University Dresden and the Prussian Cultural Heritage Foundation.