The Szombierki Power Plant in Bytom was established in 1920. The “cathedral of industry”, designed by the Zillmann brothers (Georg and Emil), is still an impressive symbol of the Industrial Revolution. This Modernist power plant, with huge potential for reuse and locally registered as a monument, is threatened by the risk of demolition. Szombierki operated for almost 80 years and was one of the last hard-coal powered electric power plants in Europe. Over the past two decades, the building has been empty. Despite several attempts to redevelop it, its condition has deteriorated significantly. 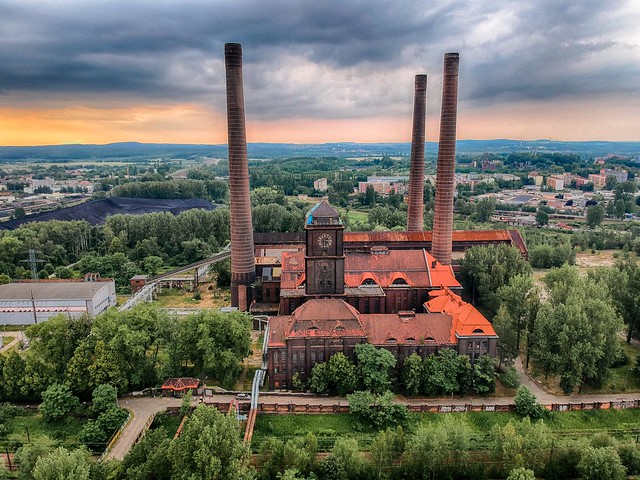 The monumental block is characterised by its magnificent dark red brick facades and three slender chimneys. In terms of size and capacity, it is comparable to similar power plants in the United Kingdom, such as the Battersea Power Station and the Bankside Power Station. The latter was successfully adapted for cultural purposes and now houses the Tate Modern museum.

Leaking roofs and windows, vandalism and theft have accelerated the building’s degradation. The private owner did little maintenance, and did not carry out an EU project to adapt the facility to new purposes. If no immediate solutions are found for Szombierki, the monument will be destroyed.

The Foundation for the Protection of Silesian Industrial Heritage, which nominated the Szombierki Power Plant for the 7 Most Endangered programme 2020, supports the preservation of this important and representative element of Silesia’s industrial heritage. The Foundation’s activists have successfully engaged in various types of awareness-raising activities, including the organisation of an exhibition about the facility for local Polish museums, and the preparation of a student competition at the Faculty of Architecture of the Wroclaw University of Technology for the adaptation and re-use of the Power Plant.