The Watermills of Bistrica are a unique complex of mills for grinding grain and rolling cloth created between the 19th century and the mid-20th century, located in the village of Bistrica, along the river Bistrica in Eastern Serbia. The architecture of the watermills presents the folk characteristics of Balkan rural structures, namely small-scale and wooden constructions. 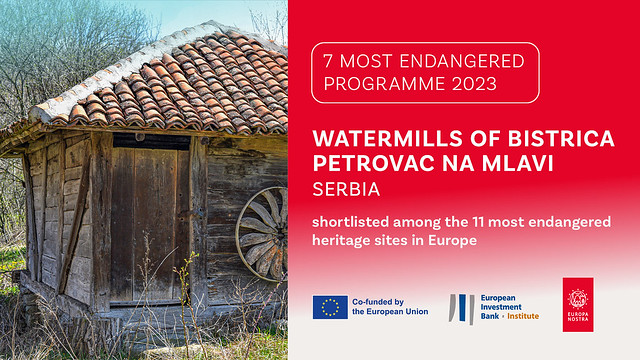 The Bistrica village was first mentioned in the 14th century carrying a traditional way of living, with the agricultural tools being used from antiquity until the industrial revolution, when they were replaced with mechanical tools. Understanding this agricultural way of life and its harmonisation with nature is an important tool for both the preservation of Europe’s heritage and also for contemporary climate action.

Today, the watermills are under the threat of destruction due to their long-term abandonment and exposure to harsh weather conditions.

The Watermills of Bistrica were nominated to the 7 Most Endangered Programme 2023 by the local community – with the support of the local “Native Museum” and the Assembly of Millers of the Region, in collaboration with the Tourism Organisation of the Municipality of Petrovac na Mlavi – and with the endorsement of Europa Nostra Serbia.

The nominator aims to rehabilitate the complex of watermills and include it in the sustainable tourism plan of the Ethno Village Bistrica. Their expectation is also to create new jobs which are rewarding for the people of the region.

“Together with other residential, spiritual and commercial buildings of vernacular architecture, the Watermills of Bistrica form a unique rural landscape, bearing witness to the important process of food production once present throughout Europe. Even though some watermills are still in function, the whole complex of Watermills of Bistrica is degrading due to natural factors, such as floods, and also due to lack of maintenance. With proper restoration, interpretation and a sustainable cultural tourism plan, the Watermills of Bistrica could become a great example of successful heritage revitalisation bringing multiple benefits to local community and economy”, said the Advisory Panel of the 7 Most Endangered Programme.